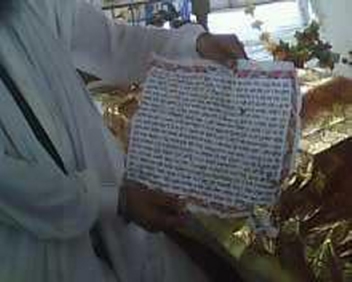 The perpetrator who committed this act, Dalip Kumar, a Hindu laborer who had migrated to Punjab only a month ago, was eventually detained by sewadars, and subsequently shot several times at a police station by a Sikh youth who wanted to redress the sacrilegious act.

It was reported that during the night, an intoxicated Dalip Kumar, along with half a dozen acquaintances broke in through a back window of the Gurdwara Sahib and attacked Granthi Zora Singh who was reciting Akhand Paatth Sahib. Allegedly, the drunk Dalip Kumar at that time tore off Ang 393/394 from Sri Guru Granth Sahib Ji’s Saroop and began to crumple the sacred Ang in his hands.

Sri Guru Arjan Dev Ji Gurdwara Sahib, Sahnewal
Head Granthi Jaswant Singh, who was awakened by all the commotion, armed himself with a metal pipe, and confronted Dalip Kumar. Incidentally, his acquaintances quickly dispersed when they saw, a local sewadar, Thekedar Surinder Singh, who was driving nearby, pull over his vehicle next to the Gurdwara Sahib property.

Left alone, Dalip Kumar was swiftly apprehended by sewadars and handed over to the local police. After the identification of Dalip, several other perpetrators who had absconded were also arrested by the police.

As news spread about the sacrilege, the local Sangat began to gather in large numbers at the Gurdwara Sahib to see first-hand the condition of Sri Guru Granth Sahib Ji’s Saroop and to protest the heinous act committed by this gang of miscreants.

According to press reports, around 3:00pm in the afternoon, a Sikh youth named Mandeep Singh from the town of Kubay, near Samrala, entered the police station where Dalip Kumar was being detained, and asked who was responsible for the sacrilege. When Dalip’s acquaintances all pointed towards him, Mandeep Singh immediately pulled out a loaded .32 caliber revolver and at point blank shot the perpetrator several times in the abdomen. 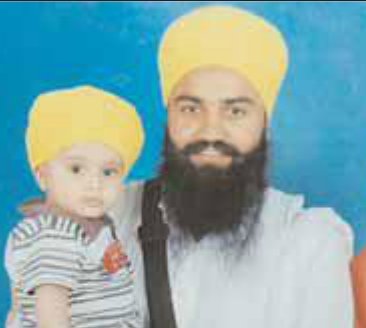 Bhai Mandeep Singh, who attempted to redress the sacrilege
Bhai Mandeep Singh was quickly apprehended by the police staff, and the seriously injured Dalip Kumar was rushed to Ludhiana’s Apollo Hospital and is reportedly in critical condition, and being kept under armed guard.

The remaining perpetrators have been reportedly shifted to an undisclosed location and are also being kept under police protection. Emotions are running high in the Sikh community who are fed up with these ongoing blasphemous acts being perpetuated by various cultists and miscreants.

The local Sangat has initiated another Akhand Paatth Sahib at the Sri Guru Arjan Dev Ji Gurdwara Sahib seeking forgiveness for disturbance in the original Akhand Paatth, and is scheduled to conclude on Sunday.