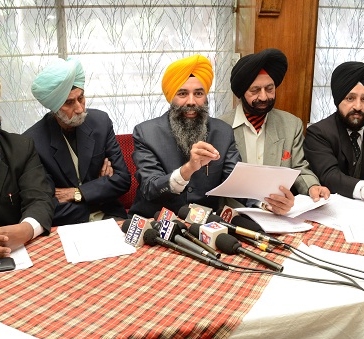 CHANDIGARH, PUNJAB - All India Sikhs Students Federation (AISSF) and “Sikhs for Justice” (SFJ) has unearthed the “Murder Fields” at Tughlakabad and Nangloi where dozens of Sikhs belonging to Armed Forces were butchered to death during November 1984. The high Ranking officers & junior Ranks those who fell victims to the mayhem unleashed against serving Sikh defence personnel at Tughlakabad and Nangloi Railways Stations is a National Shame say the organizations.

AISSF, SFJ And All India Defence Brotherhood (Punjab) released the services particulars and other relevant details of the armed forces personnel killed in November 1984 at death traps laid at Tughlakabad and Nangloi. The documents obtained by AISSF reveals a single FIR Number 355 dated November 1, 1984 lodged under sections 147, 148, 201, 302, and 295 of the IPC lodged with Government Railway Police (GRP) Delhi. The Railway Protection Force (RPF) responsible for law and order at the Railway property not only failed to protect these Sikh Army Officers, but rather it is believed their weapons were instead used to kill the Sikh victims at Tughlakabad and Nangloi Railway Stations.

Pointing to the criminal silence by the Armed Forces for the past 28 years over the murder of its high ranking officers, AISSF President & Brigadier Kahlon have demanded the Ministry of Defence take immediate action in the prosecution of the culprits an leaders which masterminded the planned slaughter of Sikh army men during November 1984.

Brigadier Kahlon while speaking at a Press Conference stated that the Defence community in particular and the country as a whole would like to know from the Chiefs of Army Navy and Air Force what action was taken in response to these killings and what will now be done as a result of the revelation of these brutal killings of its own members, with use of their own weaponry and men.

Brigadier kahlon and other leaders have also demanded an immediate constitution of judicial commission so that the truth may come out and action be taken against the butchers involved in the killing as serving members of the the national army and armed forces.

AISSF has demanded a debate in the Parliament to determine why the slaughters broad day light of the nations defenders were completely ignored and no action has ever been taken against the perpetrators. The ruthless murder of high ranking Sikh Army Officers at Tughlakabad and Nangloi in the presence of Railway Police during November 1984 also proves the connivance of police and entire administration of the country in genocidal attacks on Sikhs stated Peer Mohammad.

Amongst those killed in the Massacres killed:

The press conference held by SFJ and AISSF was attended