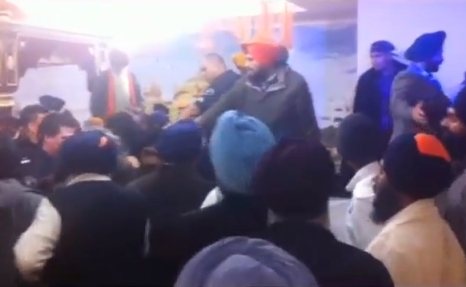 BUENA PARK, CA (KP) – The heretic missionary preacher Sarbjit Dhunda’s first program in Southern California initiated into chaos in the face of livid opposition from the Sikh community for his blasphemous remarks on Naam Simran and Sri Dasam Bani, and seeking safety, he eventually ended up hiding behind a cadre of women supporters.

Sarbjit Dhunda, who had faced fiery opposition during his recent UK trip, was visibly shaken by the intensity of opposition that continues to follow him abroad.

His initial program was scheduled at Buena Park Gurdwara in Southern California for New Year’s Eve. Local Gursikhs had met with the management committee earlier in the week, and had been promised that a free discussion between the Singhs and Sarbjit Dhunda would be held. But the craven Dhunda, out of fear, declined to meet with the Gursikhs for a discussion even after multiple attempts.

During the New Year’s Eve program at Buena Park, many Gursikhs had already gathered at the Gurdwara Sahib and were collectively reciting Naam Simran, when the management committee demanded that they vacate the stage and leave the Gurdwara premises so the stage could be handed over to Dhunda. Since both the management and Dhunda reneged on thier promise, the Gursikhs refused to leave and continued on with the Simran recitation along with the Sangat.


According to eyewitnesses, a handful of Dhunda supporters along with committee members then became very aggressive and started to manhandle the Gursikhs sitting on stage. This altercation eventually resulted in the forcible removal of the dastars of two Gursikhs and a committee member. Much to the embarrassment of his cronies, the "ਨਿਧੜਕ" Dhunda showed his cowardly colors at this time by strategically placing himself behind a cadre of female supporters who were more than eager to provide him this protection. Interestingly he has done exactly the same thing in Edmonton, Canada when he hid alongside female supporters during a similar ruckus in 2011.

The management committee, who had earlier backtracked on their promise for a peaceful discussion between both parties, in a desperate attempt to silence the Sangat, summoned the Police authorities who entered the premises bare-headed and with their shoes on and forcibly removed the Gursikhs from the Gurdwara premises.

The refusal of Dhunda to have a discussion with the Gursikhs, and the heavy handed tactics of the gurdwara management to silence and forcibly remove these dozens of Amritdhari Singhs from the Gurdwara premises illustrates the level of desperation of Dhunda and supporters who want utilize Gurdwara platforms for their blasphemous mis-parchar but are not willing to face the concerns and queries of the Sangat who are questioning their malicious agenda.

It seems as if Dhunda’s California tour is already off to a rough start, and could be possibly cut short as key Gurdwara Sahibs throughout the state have declined to host this heretic’s hate filled sermons which openly attack the concept of Naam Simran, the Nitnem Banis, and sacred Bani of Guru Gobind Singh Sahib Ji. Gurdwara Sahibs have always been the core institution for Sangat and Gurmat parchar for our community, they should never be misused as a venue for heresy and mis-parchar.