NEW DELHI (KP) - A Sikh family’s trip on the Muri Express from Delhi to Patna Sahib turned into a horrific nightmare after their teenage daughter and the family was assaulted by hoodlums as police authorities stood by and watched.

Such savage attacks on helpless women, children, and minorities are so frequent that they have become the shameful trademark of a country that prides itself as being the world's most populous democracy.

Trouble began for the Sikh family at the Hathras Junction Station in Uttar Pardes when a dozen young ruffians boarded the Muri Express car S-5 in which the family from Gaziabad, Patel Nagar, was traveling. The young trouble makers immediately began to harass and taunt their teenage daughter using lewd remarks.

When the Sikh family protested their offensive behavior, the young men got up and suddenly started to tear off the clothes of the young Sikh girl. The Sikh men were also attacked and severely beaten by the ruffians and their dastars (turbans) ripped off.

"The young Sikh girl's was taunted, her clothes were ripped off, but the Railway Police just stood by and watched..."

Most disturbingly, this all happened as the Government Railway Police (GRP) officials stood by and did nothing to stop the attack on the Sikh family and their teenage daughter despite desperate pleas for help.

According the official Indian Railways website, the GRP are members of the State Police and are "responsible for the maintenance of law and order and policing on the railways including running trains." 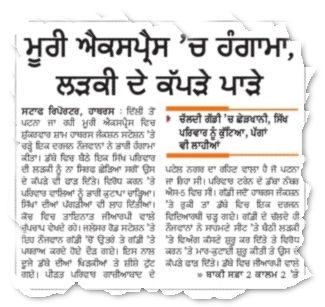 During the commotion, some of the frightened passengers attempted to stop the train by pulling on the emergency chain, but the engineers and the police ignored their requests.

According to the family the attackers exited the train at the Jalesar Road Station and then began to throw rocks and stones towards the Sikh family and in turn broke many of the windows of the train car. Again, the Railway Police did nothing to stop the perpetrators and silently stood by.

The victimized Sikh family attempted to file a complaint at the Jalesar Road Station Police officials, but no action was taken in regards to their complaint.

This is yet another one more shameful example of a failed nation that boast itself as the "world's most populous democracy", yet it cannot even enforce its own laws and provide basic protection for its very own citizens.