United Nations asked to probe killings of Sikhs in Punjab

CHANDIGARH, PUNJAB (KP) - In the presence of human rights workers and media, a Sub-Inspector of the Punjab Police, Surjit Singh has openly exposed the systematic and widespread human rights abuses carried by Punjab police during 1980s-90s in Punjab.

Surjit Singh has admitted before media that he killed 83 innocent Sikhs during early-1990s in Punjab. Surjit told media persons that during he was recruited into police training in 1989 and was deployed as a constable in 1990, and evealed that he was asked by senior police officers to killed Sikh youth who had already been in police custody. As a result of following these orders he was soon promoted as SHO of Police Station Mehta, he said.

He also stated that he was promoted as SHO of Mehta by SSP Paramjit Singh Gill, who is currently Commissioner of Police in Ludhaina. "I was a constable (sipahi) and I was promoted as SHO. What was the reason for it? -- that I and Gill Sahib both know", Surjit Singh told media persons while speaking in Punjabi.

He clearly stated that the high police officials directed him to carry out fake encounters and he got appreciation and promotions for carrying out these fake encounters. Surjit Singh admitted that he killed 83 Sikh youth in fake encounters on the directions of high ups in Punjab police.

According to media reports, Surjit Singh, has been suspended by Tarn Taran police due to these allegations, and claims that his life was in danger and from SSP Gill. He said that SSP Rajbir Singh Hundal had threatened to kill him. 'SSP Hundal threatened me that my dead body would be found in river', he added.

These disclosures have once against put the human rights abuses by Punjab police in focus, that were widespread and systematic during 1980s-1990s. Thousands of innocent Sikh youth were killed in custody. The Punjab police had invented a practise of 'staged encounter' or 'fake encounter' in which the police used to kill persons already in their custody and later staged a story that such persons were killed in a police encounter. The dead bodies of victims were secretly cremated by the Punjab police as 'unclaimed/unidentified dead bodies'.

Human Rights activist Jaswant Singh Khalra had exposed these abuses with documentary proof, and as a result of his relentless activism Jaswant Singh Khalra was killed during 'enforced disappearance'. Recently the Supreme Court of India confirmed that at least 2097 Sikhs were killed and secretly cremated by Indian security forces.

United Nations asked to probe killings of Sikhs in Punjab

In reaction to the SI Surjit's revelations, the Khalsa Human Rights, the human rights wing of the Sikh Federation (UK), has written to Professor Christof Heyn, the UN Special Rapporteur on extra judicial, summary or arbitrary executions following the confession last week by Sub-Inspector Surjit Singh of the atrocities committed by him and security forces in Punjab in the early 1990s. 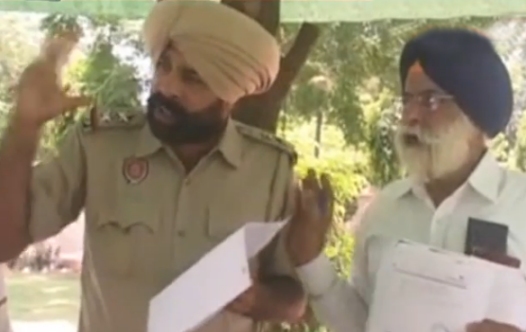 A Khalsa Human Rights spokesman said: ‘We understand human rights activist Kirpal Singh Randhawa has said that the Punjab and Haryana High Court would be approached to obtain a CBI investigation into the matter.’

‘However, we do not think India can conduct an independent and impartial investigation into the atrocities that will result in the identification and prosecution of responsible police officers.’

‘We have therefore written to the UN Special Rapporteur who has recently criticised India to ensure international pressure is exerted on India.’

Bhai Amrik Singh, the Chair of the Sikh Federation (UK) added: ‘From what Surijit Singh has described these are clear cases of extrajudicial and arbitrary executions that are illegal and without due regard to the law or legal procedure as defined by the United Nations.’

‘Khalsa Human Rights are waiting for further information from lawyers and human rights activists about the 83 Sikh killed before submitting the Model Questionnaire developed by the Special Rapporteur as there is no need to exhaust domestic remedies in India before taking the matter to the United Nations.’