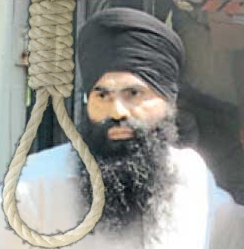 NEW YORK, NY (KP) - Amnesty International stated that the execution of Prof. Davinderpal Singh Bhullar and others currently on death row, would be a blow to human rights. The statement by the global human rights organization comes on the heels of unsubstantiated reports of that the executions of Prof. Davinderpal Singh and two other individuals on death row are imminent.

Sam Zarifi, Amnesty International's Asia-Pacific Director criticized the decision and stated that the executions "would be a step backwards for human rights in the country. For India to revive capital punishment now would also be bucking the global trend towards abolition of the death penalty, with numbers of executions continuing to decline."

Professor Bhullar, a graduate in electrical engineering from Guru Nanak Engineering College, Ludhiana, served as professor in different technical colleges of Punjab. Like many Sikh youth facing harassment from the Punjab Police, he had managed to escape to Germany in December, 1994, when his father disappeared while in the police custody.

His application for political asylum was rejected in 1995 and he was deported to India. Though the immigration authorities sent him to India, a German court overruled the decision of the lower court in connection with declining political asylum to him when he came back to India. He has been currently incarcerated in the high security Tihar Jail.

"It is well known that torture remains a pervasive and daily practice in every one of India's 25 states." - Amnesty International

Professor Bhullar was originally sentenced to death on Aug 25, 2001 and the Supreme Court of India had dismissed his appeal previously, despite the fact that the presiding judge at the Supreme Court submitted a dissenting opinion, pleading for an acquittal, citing a lack of corroborative evidence for Professor Singh Bhullar's "confession" which was forced upon him using torture.

Despite being a signatory to the Convention Against Torture, it is well known that torture remains a pervasive and daily practice in every one of India's 25 states, as acknowledged by Amnesty International, Human Rights Watch and the American State Department.