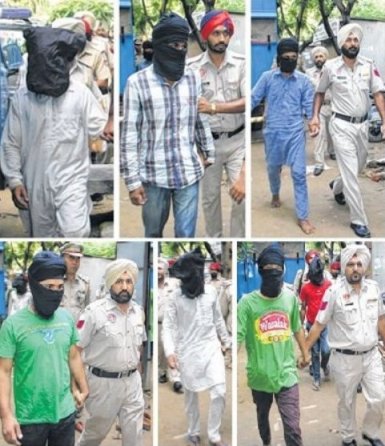 FATEHGARH SAHIB, PUNJAB - For last few days the Punjab police is on the hunt for the Sikh youth again as at least 19 young Sikhs have already been arrested by Punjab police from various places in Punjab.

All arrested have been linked by the Punjab police with the so-called attempts to revive militancy in Punjab.

According to the police social networking site “Facebook” was their meeting point and they were planning to attack Indian leaders accused of killings Sikhs during the Sikh genocide 1984 besides some ‘so-called’ Shiv Sena leaders.

Fatehgarh Sahib police claimed to bust plans of revival of militancy in Punjab:

During this press press conference SSP Gurmit Singh Chauhan was accompanied by SP (D) Gurpreet Singh and DSP Hardavinder Singh Sandhu. Police officers stated that Nadha Sahib resident Satnam Singh was in contact of Uttar Pardesh’s Janpal Singh for procuring arms. As per police claims Gurlal Singh from Dubai had send some money that was received by Swaran Singh of Tarn Taran allegedly for reviving militancy.

As per media reports on 11 September, 2013 the Fatehgarh Sahib police claimed to arrest six more persons that were allegedly linked with those whose arrest was declared on 6 September. According to the police it had secret information that Satnam Singh was the group leader of those arrested on September 6, 2013. SSP Chauhan reportedly told media that (1) Satnam Singh was arrested in a joint operation with Maharashtra police and a AK 47 was allegedly recovered from him.

One Arrested by Barnala Police:

Following these arrests on September 13, 2013 the Barnala police’s SP(H) Narinder Kaushal, SP(D) Swaran Singh Khanna and CIA staff in-charge Baljeet Singh informed media that (1) Surinder Singh alias Thikriwala (Barnala) has been arrested under sections 123A, 153A, 153B, 120B of Indian Penal Code and sections 17, 18, 28, 38, 39, 40 of Unlawful Activities Prevention Act.

On 15 September, 2013 Gurdaspur SSP Sukhwant Singh Gill informed media that the Gurdaspur police has arrested 3 young Sikhs about whom it had information that they were linked with those arrested by the Fatehgarh Sahib police. He claimed that (1) Sukhjinder Singh (Purana Shhala, Gurdaspur), (2) Narinderpal Singh (Gurdaspur) and (3) Surinder Singh (Keeri Afgana, Sri Hargoindpur) were arrested by Gurdaspur police and one AK 47 and 20 cartridges, .38 bore US made Smith pistol, .45 bore Brazil made pistol were recovered from them. He said that they were arrested from a Ford Figo car numbered PB-06 S- 1313 and 2 motorcycles were also recovered from them.

It is notable that Sukhjinder Singh is a close relative of Bhai Jaspal Singh Gurdaspur who was killed on 29 March, 2012 when the police had opened fire at a peaceful dharna that was being held by the Sikhs at Gurdaspur. The police had not issued any warning before opening direct firing. Bhai Jaspal Singh was reportedly hit by a AK 47 bullet fired by a police personal and died.

The case related to Bhai Jaspal Singh’s killing is currently being heard by the Punjab and Haryana High Court that had summoned Punjab’s DGP and Principal Secretary for their failure to file replies in this case. Jaspal Singh’s family members what the CBI to make an inquiry in to this case. The family member of Sukhjinder Singh told media that they were being pressurized by the police to ask Jaspal Singh’s family with draw case from the high court. They said that Sukhjinder Singh was framed in this case by the Gurdaspur police under deep rooted conspiracy to pressurize the family and close relatives of Jaspal Singh to withdraw case from the High Court.

As per village panchayat, village resident and family members of Sukhjinder Singh, he was arrested during night time from his house while he was sleeping. He was taken away by the police personal on motorcycle. It was only on the next day when the village panchayat, the resident and the family members came to know that police has posed Sukhjinder Singh as KLF militant and showed his arrest after planting some arms recoveries on him.

On September 16, 2013 Fatehgarh Sahib SSP Gurmit Singh Chauhan again held a press conference to declare that they have made 5 more arrests in co-ordination with Maharashtra Police. SSP, along with SP (D) Gurpreet Singh, DSP Hardavinder Singh Sandhu informed media persons during a press conference that on the basis of information extracted from a group leader arrested by Fatehgarh Sahib police (1) Gurwinder Singh (Taradeo, Mehta, Amritsar) who was living at Nanded was brought to Fatehgarh Sahib on transit remand while 4 others including (2) Bhag Inder Singh alias Luckey (Nanded), (3) Manpreet Singh (Kanjiwal, Nanded), (4) Rajwinder Singh (Nanded) and (5) Parminder Singh (Nanded) have been booked by Wazirabad police station and the police has allegedly recovered arms from them after making their arrest. SSP Chauhan said that Parminder Singh was an employees of Nanded Sahib management whose transit remand was secured from local area magistrate.

During this press conference Fatehgarh SSP Gurmit Singh Chauhan revealed that Punjab’s Director General of Police (DGP) has announced to award promotions to the police personal involved in these arrests. He said that those who shall be promoted include Fatehgarh Sahib inspector Gurmit Singh.