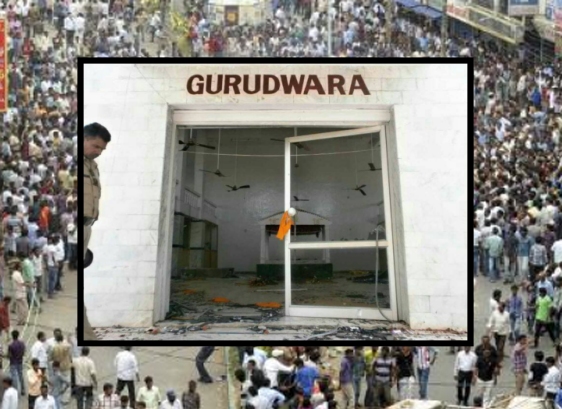 ANDHRA PARDES - (KP) Protestors agitating against the upcoming bifurcation of Andhra Pardes into Tilangana have made the Sikh community their latest target by desecrating the Holy saroops of Guru Granth Sahib Ji.

According to media reports, frenzied mobs ransacked a Gurdwara Sahib in the town of Vijyanagram and desecrated two holy saroops of Guru Granth Sahib Ji by first throwing them onto the street and setting them ablaze.

According to reports, several homes belonging to local Sikligar Sikhs were also attacked and burnt by the rampaging mobs.

Meanwhile, a curfew was clamped in Vizianagaram town and shoot-at-sight orders issued by district authorities in the wake of the large-scale violence this weekend.

Vizianagaram, a town in coastal Andhra, has been roiling since the Union Cabinet's decision was announced for the formation of a new state of Telangana out of Andhra Pradesh.

According to police official, Dwaraka Tirumala Rao, there was a lot of violence reported, with the protesters indulging in arson, looting shops, setting a bank on fire, and damaging public and private properties.

Adding to the chaos, several districts in Andhra and Rayalaseema plunged into darkness Sunday after electricity employees went on an indefinite strike protesting division of the state. Hundreds of passengers were stranded at several railway stations.

The Shiromani Gurdwara Parbandhak Committee has requested the Andhra Pardes government to protect the Gurdwara Sahibs, and Sikh property and enforece law and order in the state.