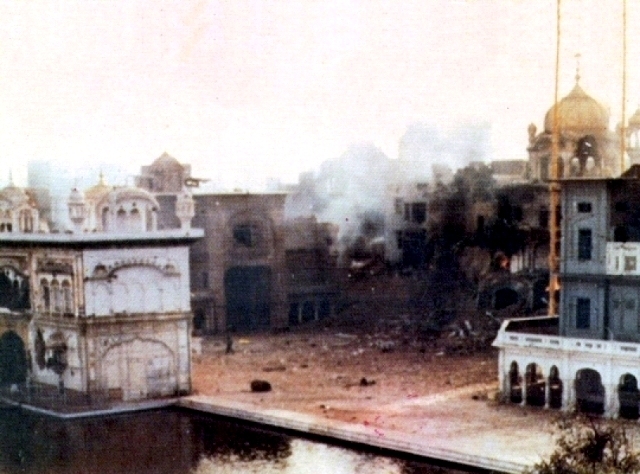 LONDON, UK (KP) – Sikh organizations have demanded the Government of United Kingdom to initiate an inquiry into the possible involvement of the British nation in the June 1984 bloody assault on Sri Darbar Sahib Amritsar, which resulted in the deaths of thousands of men, women and children, and left Sri Akal Takht Sahib, and the Sikh Reference Library in ruins.

The demand came after some reportedly “top secret” documents were released earlier this month by the UK Government which suggest that the Indian Government approached for assistance and advice on the assault that was to be launched by the Indian Army on Sri Darbar Sahib Complex. The documents were discovered by an independent journalist and posted on the blog: http://stopdeportations.wordpress.com/2014/01/13/revealed-sas-advised-1984-amritsar-raid/.

The letters are dated February 1984, and if authentic, suggest that that the UK Goverment internally knew of Indian Army's genocidal plans against the Sikh community at least six months before they were initiated.

The documents state that the UK Foreign Minister with the UK Prime Minister (Margret Thatcher) decided to respond favorably to the Indian request and in turn dispatched a SAS officer (a Special Forces officer of an elite UK regiment) to India for providing assistance in the operation plans of the attack.

"Thousands of innocent men, women and children were killed in the attack which took place on one of the holiest days in the Sikh calendar. As well as loss of life, buildings and property was destroyed and the historical Sikh reference library was ransacked. This is and remains one of the darkest episodes in Sikh history."
- Sikh Council UK Representative

Reacting to the disclosure, Secretary General of the Sikh Council UK, Gurmel Singh stated, “I am shocked and disappointed that there could have been any involvement by the UK Government and armed forces in planning the attack on the Golden Temple Complex including Sri Harmandir Sahib and Sri Akal Takhat Sahib.”

The Council called for an urgent enquiry into UK Government involvement in the 1984 events of 1984 including a full disclosure of all documentation.

Jagdeesh Singh of the 1984 Genocide Coalition stated that “the above documents amount to explosive evidence of British government participation in this mammoth crime against humanity, and confirmation of what we suspected all along. June 1984 resulted in thousands of civilian deaths, disappearances and wider devastation.”

According to the Sikh Council UK the Foreign and commonwealth office stated that “These events led to a tragic loss of life and we understand the very legitimate concerns that these papers will raise. The Prime Minister has asked the Cabinet Secretary to look into this case urgently and establish the facts. The PM and the Foreign Secretary were unaware of these papers prior to publication. Any requests today for advice from foreign governments are always evaluated carefully with full Ministerial oversight and appropriate legal advice."