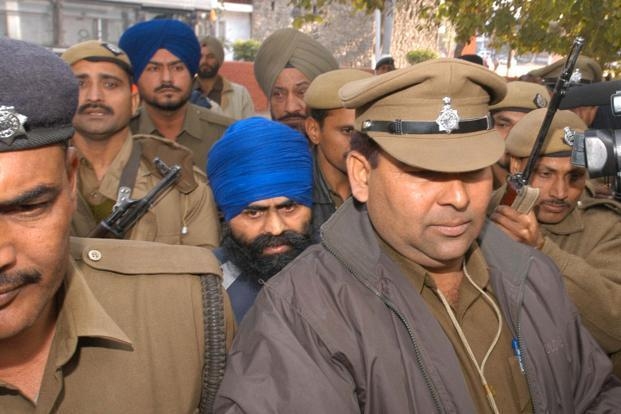 NEW DELHI (KP) - India's Supreme Court ordered a stay in the execution of Sikh political activist Prof. Davinderpal Singh Bhullar, and has requested a report on his mental health from the Institute of Human Behaviour and Allied Sciences where he is being treated.

The stay was a complete reversal of the April 2013 Supreme Court decision which rejected a similar petition moved by Prof. Bhullar’s wife, Bibi Navneet Kaur on behalf of her husband.

Charges against Bhai Devender Singh Bhullar were framed by Indian Authorities under the controversial and now defunct TADA laws of the 1980s and 1990s for an alleged attack on Youth Congress leader Maninder Bitta on September 11, 1993.

While he was waiting for the death sentence, Professor Bhullar was convicted of other charges by the Punjab Police. However on the 1 December 2006 in the Chandigarh and Haryana High Court the judge acquitted Professor Bhullar on the basis of lack of evidence. Sh R.S. Baswana Additonal Sessions Judge held that their was no evidence on file to link the accused with the other alleged crimes and despite the fact that the prosecution had 15 years to gather evidence against Mr Bhullar, they were unable to produce evidence linking Mr Bhullar to the case against him.

Professor Bhullar, a graduate in electrical engineering from Guru Nanak Engineering College, Ludhiana, served as professor in different technical colleges of Punjab. Like many Sikh youth facing harassment from the Punjab Police, he had managed to escape to Germany in December, 1994, when his father disappeared while in the police custody.

His application for political asylum in Germany was rejected in 1995 and he was deported to India. Though the immigration authorities sent him to India, a German court overruled the decision of the lower court in connection with declining political asylum to him when he came back to India. He has been currently incarcerated in the high security Tihar Jail.

The German Ambassador to India, Michael Steiner has appealed to the Indian government 'not to implement' the death penalty and thus reprieve the capital punishment awarded to Devender Singh Bhullar.

The Supreme Court's decision came just days after it commuted the death sentences of 15 other prisoners to life in prison. That decision also ruled that mental illness and solitary confinement could also be reasons for commutation of death sentences.

Professor Bhullar was originally sentenced to death on Aug 25, 2001 and the Supreme Court of India had dismissed his appeals repeatedly, despite the fact that the presiding judge at the Supreme Court submitted a dissenting opinion, pleading for an acquittal, citing a lack of corroborative evidence for Professor Singh Bhullar's "confession" which was forced upon him using torture.

Despite being a signatory to the Convention Against Torture, it is well known that torture remains a pervasive and daily practice in every one of India's 25 states, as acknowledged by Amnesty International, Human Rights Watch and the American State Department.