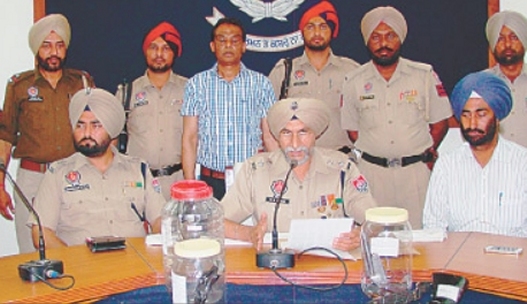 News Conference Orchestrated Ahead of Polls

PATIALA, PUNJAB (KP) – In yet another sensationalized announcement the Punjab Police claimed to have foiled a “terror plot” by arresting six Sikh youths under the pretext that they were members of Babbar Khalsa International (BKI) organization.

The youth were identified as Gurdeep Singh from Fatehgarh Sahib, Amarjit Singh from Patiala, Jasvir Singh, Samardeep Singh, and Sucha Singh from SAS Nagar, and Harjinder Singh from Chandigarh.

The Patiala SSP, Hardyal Mann claimed that two of the youths, Jasvir Singh, and Gurdeep Singh were associates of Bhai Jagtar Singh Hawara and Paramjit Singh Bheora, who are currently imprisoned in Tihar Jail.

The police also claimed that arms and ammunitions were recovered from the youths and claimed that the youth were planning to utilize them in a plot to kill various unnamed politicians and the controversial cult leader, Piara Bhaniarawala.

The police declined to provide further details on this purported "plot".

The Punjab Police has been often criticized by international human rights organizations of orchestrating “terror plot” arrests in the past where innocent Sikh youth are often targeted and detained on fabricated charges under the pretense of “terrorism.”

In Punjab, such arrests are usually politically motivated and the families of the arrested youth often end up being tortured and blackmailed by local police officials.

According to the 2013 India Human Rights Report by the US Department of State, Indian authorities have used torture as means for coercing a confession, and such confessions have been illegaly used in the Indian courts as admissible evidence.

Many of the youths who are caught in these sham dragnets end up incarnated for years without any fair trial or hearing, with pleas from their families often falling on deaf ears.