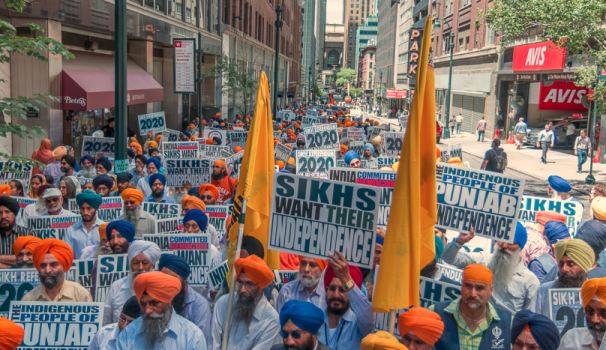 UNITED NATIONS, NEW YORK - Marking the 30th anniversary of military invasion of and massacre at the Golden Temple, Sikhs gathered in thousands before UN headquarters to announce the holding of sovereignty referendum among the diaspora in the year 2020.

It was on this very day in June 1984 when Indian Army riding the Polish brand T-64 tanks barged into the Golden Temple Complex after fierce resistance from Sant Jarnail Singh Bhindranwale and his followers who had vowed to defend the sanctity of the Vatican of the Sikh faith.

What lies at the bottom of the controversy between the disgruntled Sikhs and Indian Government is the Explanation II to Article 25 of the constitution of India which classifies Sikhs as Hindus. Offended by this constitutional assault on independent status of Sikhism and amalgamation of Sikh identity by a self proclaimed democratic and secular republic, Bhindranwale initially lead the movement for abolition of Article 25 which ultimately culminated in demanding cessation of Punajb, historical homeland of Sikhs, from India.

Sikhs claim that they have right to self determination and right to govern their historical homeland as a sovereign nation under Charter of the UN and Article 1 of International Covenant on Social and Political Rights.

"Referendum 2020" asks the Sikh diaspora to opine on the statement "I aspire for the formation of a sovereign and independent country in Indian occupied Punjab, on the basis that Sikhs are the indigenous people of Punjab, have a historical homeland, a separate religion and have the right to self-determination". 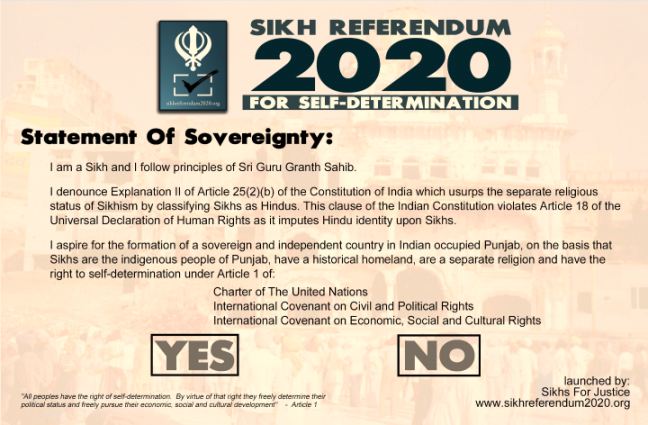 The "Referendum 2020" among diaspora is launched by a New York based rights group "Sikhs For Justice" (SFJ).

Addressing the Sikhs gathered before the UN, Karen Parker, a regular invitee before UN Human Rights Council and expert on the subject, stated that "right to self determination is an inalienable right of all the people and it cannot be taken away under any circumstances", "as indigenous people of Punjab with a history of sovereign state in a defined territory and organized religion, Sikhs clearly qualify as "people" with right to self determination".

Laying out the importance of referendum among diaspora on the question of sovereignty, Ms. Parker, added that "in this age of information technology when the world has transformed into a global village, opinion of transnational diaspora is just as important as those living in the homeland."

Every Sikh living outside India with ancestors from Punjab and who will be 18 years of age in 2020, will be eligible to register and vote in the Sikh referendum, added attorney Pannun.

Qualification to register and vote in referendum 2020, a person must be, 18 years of age by January 01, 2020; a Sikh and follower of Sri Guru Granth Sahib; and a person with ancestors from Punjab. The Voter registration which is available online is also open in offices of NGOs in 5 countries.

Several Sikh NGOs have also filed a complaint with UN urging to investigate India's unpunished crimes of June 1984. The complaint lists violations of Article 3 of Geneva Convention, Article 13 and 16 of the Protocol II for The Protection of Victims of Non International Armed Conflicts committed by India during Operation Blue Star.