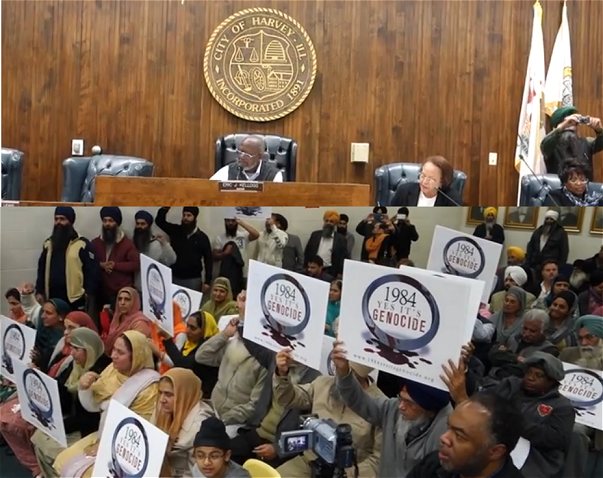 HARVEY, ILLINOIS (KP) - During an open public meeting, the City of Harvey, Illinois, situated in Cook County, officially recognized the 1984 November anti-Sikh pogroms in India as “genocide” and codemned the violence against the Sikh Nation.

A large number of Sikh community members were also present during the proceedings, including members of the human rights organization, Sikhs for Justice, and local Gurdwara representatives.

The resolution recognized “the intentional, deliberate, and systematic killings of Sikhs in India during November 1984 as ‘Genocide’ as defined under the laws of the United Sates and UN Convention.”

City representatives and general public also heard from Bibi Gurdeep Kaur, a witness and survivor of the 1984 anti-Sikh pogroms, who had earlier testified before the United Nations Human Rights Commission in New York.

Local activists also called upon US President, Barack Obama, and the US Congress to also take steps to recognize the anti-Sikh violence of November 1984 as “Genocide”.

WHEREAS, The City of Harvey is in support of this resolution to recognize the intentional, deliberate, and systematic killings of Sikhs in India during November 1984 as “Genocide” as defined under the laws of the United Sates and UN Convention.

Video Transcript of the Proceedings: 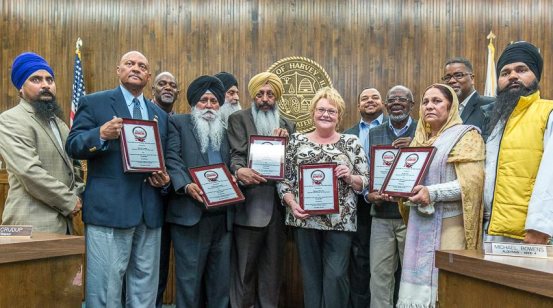 City of Harvey officials with representatives of Sikh organizations

Sender IP identification :34.232.51.240
By clicking on the 'Submit' button, you agree to the following conditions: