Ragi Darshan Singh - A Traitor Amidst the Sikhs 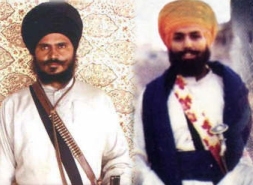 It seems controversy is not anything new for Darshan Singh, the heretic Ragi, who was recently declared a ‘Guru-Nindak’ and a ‘Tankhaiya’ by Sri Akal Takht Sahib, for disobeying the authority of the Supreme Seat of Sikhism.

Evidence has surfaced that more than two decades ago, two major freedom fighting organizations, Bhindranwala Tigers Force, and Babbar Khalsa International were suspicious of the heretic Ragi Darshan Singh, and acknowledged that he was unfit to serve as the Jathedar of Sri Akal Takht Sahib during those turbulent times.

Many have suspected that Ragi was a mole working for the Government agencies, installed to actively derail and torpedo the Khalistan movement in the late 1980s. New evidence and suspicions raised by prominent Sikh leaders of the past seem to validate this notion.

Ragi Darshan Singh was installed by the Tohra led Shiromani Gurdwara Parbandhak Committee (SGPC) in late 1986. Although Baba Gurbachan Singh Manochahal was also declared Jathedar of Sri Akal Takht Sahib by a section of the Khalistan freedom fighters, he later resigned for the sake of Panthic unity. Little did he know about the treachery that was unfolding under the leadership of his successor.

The Chandigarh Tribune narrates this shifting of power at the Sikh Takhts in their July 13th, 2002 editorial interestingly titled ‘Misdeeds’ of stalwarts during militancy. The Tribune editor notes:


On December 31 (1986), Bhai Darshan Singh Raagi joined as jathedar. On January 23, 1987, the three head priests had also been dismissed and in their place, Giani Puran Singh, Giani Savinder Singh, Giani Jaswant Singh and Giani Kashmir Singh were appointed as high priests. The ‘Sarbat khalsa’ held on January 26, 1987, approved the resolution of April 29 for Khalistan and also the recent appointments of the high priests. In a recorded message of Gurbachan Singh Manochahal played to the gathering he resigned from the post of Jathedar, Akal Takht, to accommodate Bhai Darshan Singh in the larger interest of the Panth."
(July 13, 2002 , Tribune India) 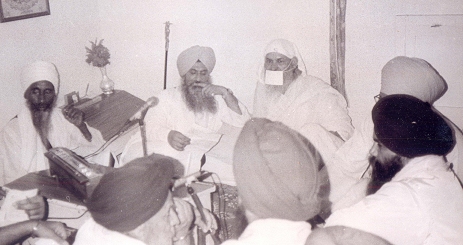 Perhaps, one of the strongest criticisms, and serious allegations leveled against the Ragi came from Baba Gurbachan Singh Manochahal. Baba Manochahal was the head of the Bhindranwala Tigers Force (BTF), and a key member of the Panthic Committee, during that time period. 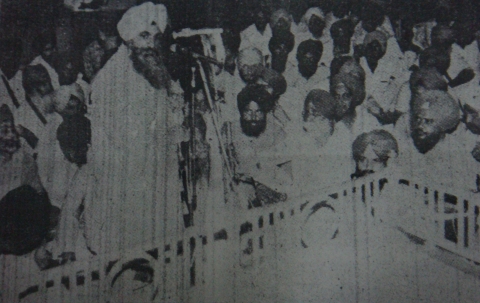 Ragi addressing the 'Sikh Convention' on August 4th, 1987,
an event that would be the catalyst for derailing the Khalistan Movement

During a convention held at the Sri Darbar Sahib complex at the Teja Singh Samundri Hall on August 4th, 1987, a statement was read by Baba Manochahal’s representative, Bhai Daya Singh Chohla, that chided the Ragi along with the rest of the ‘Singh Sahibans’ for backtracking on their previous pledge to lead the struggle for the liberation of the Sikh Homeland – Khalistan.

The convention was called by the Takht Jathedars under the pretext that this assembly would 'define' the goals and objectives of the Sikh cause. Baba Manochahal and others openly questioned the need to define the Panth’s goals and objectives when the Sarbat Khalsa had already done so. Baba Manochahal argued that the goal for the establishment of an independent Sikh Homeland, Khalistan had already been declared in 1984 and further ratified by the Sarbat Khalsa in 1986.

Khalistan no longer a goal

At the gathering it was declared by the Ragi that the Sikh nation’s goal was not an independent and separate homeland of Khalistan. Instead, the Sikhs should strive for a more more autonomy in India as promised by Pandit Nehru during the partition. The Sikhs no longer needed to fight an armed struggle declared the Ragi, self-governance and autonomy could only be gained through dialogue and votes.

Chaos prevailed throughout at the convention, but this did not distract the Ragi from his task. This was perhaps the first direct attempt to derail the Khalistan struggle at the public level, and an insult to the declarations passed by the Sarbat Khalsa in 1986. 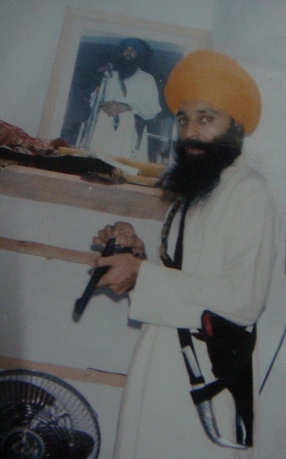 Bhai Daya Singh of Chohla Sahib, an associate of Baba Gurbachan Singh Manochahal at that time delivered a fiery message from BTF’s Jathedar, and directly alleged that the Singh Sahibans were working hand-in-hand with the Indian Government to mislead Sikh community and divide the Sikh Freedom Fighters.

In the message read by Bhai Daya Singh, Baba Manochahal warned, such underhanded tactics would not be allowed to succeed by the Sikh Nation.

Some of main points and questions raised by Baba Manochahal to the Singh Sahibans were as follows:

Regardless of the strong opposition by Baba Manochahal and other Jujharoo Singhs, the Ragi and the convention organizers passed resolution that would attempt to derail the Khalistan struggle by redefining it as simply a movement for further autonomy for Punjabis in the current Indian framework.

The next day Punjabi papers eagerly flashed the redefined objective by the Jathdars all over the front-pages. It seemed like the first steps of the Government planned coup to hijack the Sikh Freedom struggle from the Jujharoo organizations had been successfully accomplished – thanks to the Ragi, and his SGPC cohorts. 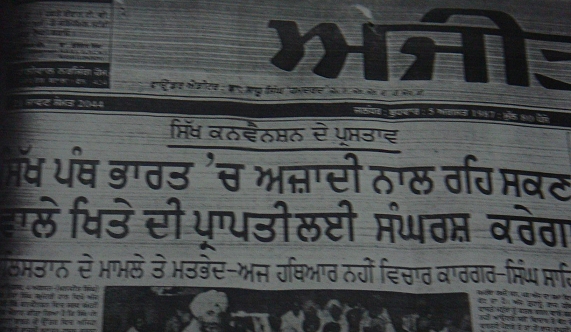 Front page of Ajit on the Ragi organized 'Sikh convention'

“Resolutions of the Sikh Convention"
"Sikh Panth will struggle for the region inside India where they can have automony."
"Disagreement over the issue of Khalistan – Diplomacy more effective than Weapons: Singh Sahib”
(Translation of Ajit newspaper headlines from August 5th, 1997)

In a seperate audio, Baba Gurbachan Singh Mahochahal shared his views on the treachary by the Ragi and his predecessors.

Bhai Daya Singh was later killed by the Indian forces near the village Jandiala Guru. Many members of Bhai Daya Singh's family were also killed in the coming months. Baba Gurbachan Singh Monchahal was killed in February 1993. 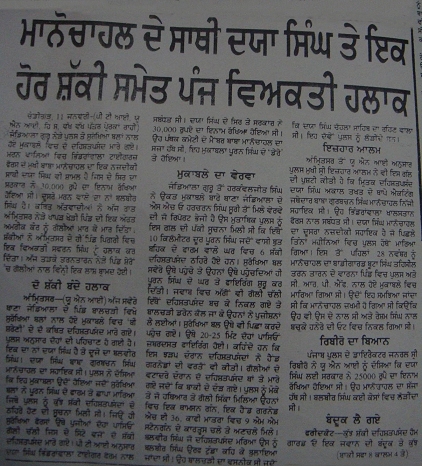 When it became clear that the Ragi was working in the interest of the central government, activists of the Babbar Khalsa International, who like other Jujharoo organizations had originally supported the Ragi in his early days at the Jathedar, also became suspicious of his activities.

An incident narrated by Babbar Khalsa International Deputy-Chief Bhai Sulakhan Singh Babbar stands out. Bhai Sahib was the main liaison between the Jathedars and the BKI leadership. During the late 1980s, Bhai Sulakhan Singh had made a surprise visit to the residence where Ragi Darshan Singh was staying. 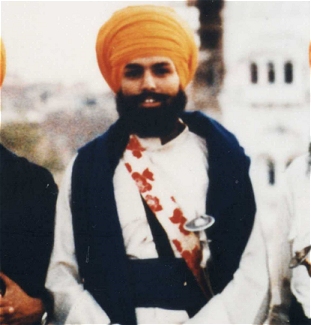 When Bhai Sulakhan Singh entered the Ragi’s residence he discovered that the Ragi was in the middle of a meal that included objectionable items, including eggs and omlet. Being a Rahitvaan Singh Bhai Sulakhan Singh immediately scolded the Ragi for being an Akal Takht Jathedar and violating the Sikh code of conduct. The Ragi defended the consumption of meat and stated they were considered Jhatka and thus allowed by the Panth. Bhai Sulakhan Singh further scolded him for making up such excuses, and for betraying the sacred position of the Takht, and stated this would be the last time he and the BKI organization would communicate with him.

Bhai Sulakhan Singh immediately left the Ragi’s residence in disgust, and avowed that no members of BKI would ever keep any communications with Ragi or recognize him as a Jathedar since he had violated Sikh Rahit Maryada. Babbar Khalsa Singhs were known for their strict rahit, and would not allow anybody to enter the organization who was lax in the Sikh code of conduct. The organization believed that a Sikh who could not stay true to his Guru and His Rahit, would not stay true to the Sikh Nation and it's cause.

Interestingly, over the years further information has come out about the offensive dietary habits and shady morals of the Ragi, including the consumption of alcohol. Now he is often referred to as a "ਸ਼ਰਾਬੀ-ਕਬਾਬੀ ਜਥੇਦਾਰ" due to such transgressions.

One can only wonder how a man who had no commitment and devotion for the Panth, and lacked basic Rahit of Sikhi could hold such a position in the Sikh nation? There is no question that the Ragi was unfit to lead the Sikhs during those turbulent times. So why was a man who has no religious or Panthic loyalty installed at the Sikhs’ apex Takht? Perhaps it was for a different cause - to undermine the Sikh leadership of that time, and create chaos in the masses. Isn’t that what the Ragi is doing now? Undermining the Sikh leadership and creating chaos?

While determined GurSikhs sacrificed their lives for the Panth at that time, selfish individuals such as Ragi used the opportunity to gain personal wealth and fame, and continue to cause harm to the Nation. It is due to the traitorous actions of such people that the Sikhs are in this current state.

The echoes of the warnings given by the great Shaheeds Baba Gurbachan Singh Manochahal and Bhai Sulakhan Singh Babbar are as relevant as they were two decades ago. The question is - are we listening?

Those who cannot learn from history are doomed to repeat it.